The Battle for Empire City event is a PvP event specifically between the syndicates in game.  Syndicates must "declare war" in order to participate in the event.  Any member can do this.  Once war is declared, your syndicate will be matched up with other syndicates of similar attack strength, fighting to win influence points.

Syndicate members will have the option to use a "power attack" that will provide a 50% increase in stats.  However, you will use all your health to achieve the increase.  Also, unsuccessful power attacks against the Defense Leader will take away 50 Shield Points.

Another thing to keep in mind is that until the Hideout go down, you will only receive half the points possible for defeating another player.  Each syndicate will start with one hideout per war and it cannot be replaced during a war.  Your top hideout will be used up by each "war" your syndicate engages in, regardless of whether is was completely destroyed or not.  The syndicate will be able to attack the Safehouse after the hideout is down and is there solely for points.  It adds nothing to a syndicate's defense.

As the end of the event, the syndicate with the most influence points will win the district being contested.  The district will be highlighted on the map as claimed and will not come up again.  Rewards will be given to the top three syndicates, top three players, and top three contributors of each syndicate.

Finally, please keep in mind that specifications for Battle for Empire City will continue to evolve and improve over time.

We'd wish you luck but you don't need luck.  You need strategy.  Be ready. 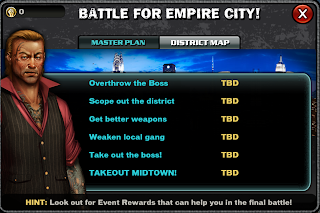 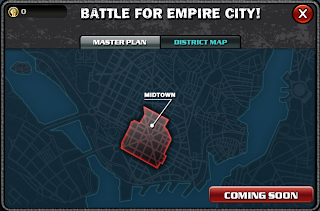